Pressure on financial markets around the world is increasing. Debt to British government bonds rises, British pound falls As a result, the Bank of England was forced to intervene in an attempt to calm the market. The country’s government intervened in the foreign exchange market for the first time since 1998 to prevent the continued decline of the Japanese yen. In China, too, authorities have imposed reserve restrictions on forex trading to contain foreign exchange outflows.

At the heart of all this turmoil is the rampant appreciation of the US dollar and rising global interest rates. Everywhere one looks around, there is little comfort to be found these days.

Every financial market in the world has a different structure and mood. The UK’s new government has announced plans for the country’s biggest tax cuts in half a century. Japan is trying to keep interest rates as low as possible, against the global trend. And the Chinese government is fighting the consequences of its ‘zero-covid’ policy of isolation from the world.

But these countries have some common challenges. Most of the world’s currencies weakened significantly against the US dollar. The DXY, or dollar index against many of the rich world’s currencies, is up 18 percent this year, the most in two decades. Tighter monetary policy coupled with continued inflation in the US will further weaken global markets.

The Bank for International Settlements (the global body of central banks) said the financial situation had changed just before the sharp volatility started last week. Central bankers’ pledges to raise interest rates have been driven by the markets and liquidity in the US Treasury bond market has declined.

Trading in global stock markets rose slightly for a short period last August. But then it hit its lowest level of the year. The MSCI All Country World Index is down 25 percent in 2022. Signs of pressure are also visible in other markets. U.S. junk bond liabilities reached nearly nine percent, more than double from a year earlier. And corporate bond liabilities were about six percent, the highest in 13 years.

Corporate Treasurers, investors and finance ministries have already feared global turmoil. Then comes the crisis and plans are made accordingly. But the critical situation has now even exceeded forecasts.

Just a year ago, some analysts predicted double-digit inflation in many parts of the world. But if markets continue to perform worse than predicted, problems arise and policymakers face one difficult situation after another.

The Federal Reserve Bank of the United States is determined to curb inflation no matter what. After the US Federal Reserve last raised interest rates on September 21, Chairman Jerome Powell said the chances of a soft landing for the US economy are diminishing. Still, the Fed remains committed to controlling inflation.

A Bank of America study found that between 1980 and 2020, when inflation rose above 5 percent in the world’s richest economies, it took an average of 10 years to return to 2 percent. 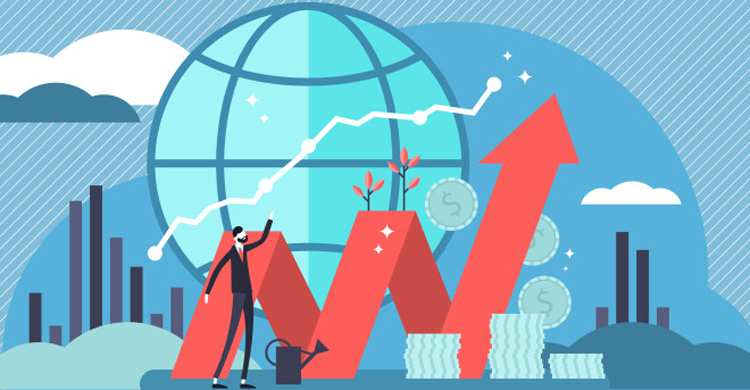 Hopes for positive global growth are quickly fading due to the ongoing crisis. In a new forecast published on Sept. 26, the OECD, a group of rich countries, said global GDP would grow by just three percent this year. But their latest forecast in December expected growth of 4.5 percent. The alliance expects global growth of just 2.2 percent by 2023.

As a result, raw material prices fall. The Brent crude oil benchmark fell to $85 a barrel, its lowest level since January. And on September 26, the copper price on the London Metal Exchange fell to its lowest level in two months.

Companies may also lower their earnings forecasts if the global economy weakens. Just as rising interest rates have hurt stock prices, it could also be the effect of lower earnings.

Demand for the dollar usually increases during recessions because investors prefer to store their assets in relatively safe places. As a result, the dollar is unlikely to fall in the event of a global economic recession. This is an ominous signal for countries and institutions around the world.

(Based on a report in The Economist)

People’s interest in insurance is diminishing!

What’s the reserve? The nation will go bankrupt if it falls?